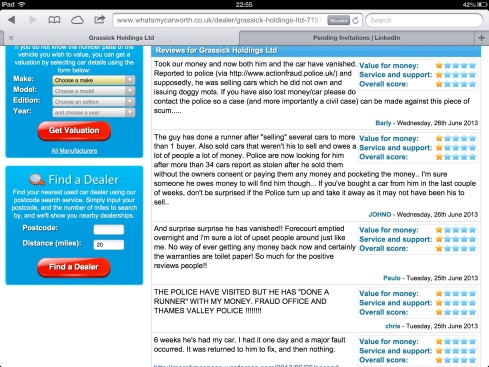 I’ve been here before, and last time the garage I dealt with split up.

Many people who had been mistreated by certain people within that garage stepped forward due to my write up, and the person who sold the car to us purchased it back.

The funny thing was that due to the number of hits that my website gets, my website came up FIRST on Internet searches like GOOGLE when people tried looking for that garage. That meant that they first thing people read was how bad that garage was, and straight away they looked elsewhere. Additionally other people used my site to put together information and track other bad dealers down.

Well it all resolved quite nicely & I really didn’t fancy having to do it again. I mean if I had to do it again I have made lots of good contacts from last time, but I think I’d rather just go direct to the courts & hit hard. I don’t like being messed around.

ANYWAY… The old Audi died and I purchased a used SEAT ALHAMBRA from Seamus Grassick of GRASSICK MOTORS LTD (GRASSICK HOLDINGS) in Wokingham.

He seems a very nice chap, and very helpful. He even fixed some ‘little’ faults that were on the vehicle when I went to buy it… Well, the flat tyre had to be mentioned a couple of times, but it got changed… as did a second tyre that went down whilst they were changing the first tyre… You know… so it was safe to drive.

One recurring fault has seemed to cause a problem, and although I am well within my legal rights to get a refund, I thought I’d let him sort it out.

The fault meant the car kept stalling. If I was at speed it would buck & restart (bump start under its own momentum), but at slow speeds it would shudder to a halt (as happened trying to leave a junction & turning across oncoming traffic into a garage.

On one occasion the jolt of a restart caused the wheels to spin on a roundabout. Most definitely not safe. On each occasion (apart from the roundabout) my 7 year old son was in the car with me.

I’ll let you make your minds up by leaving my text messages here for you to view.

Do you think I’m being fair with him?

Click on the photos to see them full size.

For general information, you might find this interesting… SALE OF GOODS ACT 1979 (Amended).

One other thing is that his website and the cars he has on AUTOTRADER have incorrect mileage listed compared to some of the cars I looked at physically at his sales forecourt, but surely that’s an innocent mistake?

After all, we all make mistakes. It’s not like they’ve been clocked, is it?

He said that my cars mileage was just a simple error because someone put the mileage the cam-belt was changed on the advert as the current mileage. Oops! Fair enough.

The thing is, after walking around his sales forecourt with his website open on my iPhone, it turns out that quite a few cars have had a similar mistake made on their adverts… Make your own minds up.

Probably just another simple error, yes? (Click for full size image.)
NOTE: AUTOTRADER only host the adverts & pictures as supplied by the seller. They take this sort of misleading information (intentional or ‘in error’) seriously.

I do hope I’m being fair. I’ve always considered myself fair.

Seems Seamus Grassick has apparently done a runner & cleared out his forecourt. 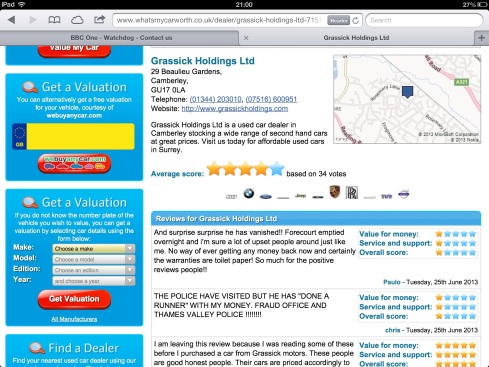 I’ve contacted Hampshire, Surrey & Thames Valley Police & they are looking into the matter. I have explained that this was simply a case of wanting my money back, but upon seeing this review site today – with reviews FROM today – saying he’s fled, I wanted to check if it was true & if it was true, then I would like to step forward with evidence & assist. Also if it’s true I shall be pressing for legal action against him.