A little gift to my blog followers

The Tortoise and the Hare running specialists (see link in top of left hand column) have come up with a great deal for followers of my blog!

Expert advice comes as standard from these people that have just celebrated ten years of being in business. But besides the free advice you can now print any blog page from my blog – Sometimespace – and present that to the staff, and you’ll get 10% discount.

Yes, just print off a page from my blog and present it to The Tortoise and the Hare staff to get your discount. Don’t say I don’t do good things for the readers of this blog!

Besides having a great range of quality sports products, the team will make sure that the gear you buy specifically suits your needs.

Running shoes and Nordic poles etc, aren’t just things that fit all people perfectly, and the expert help at Tortoise and the Hare will ensure you get the right gear for you. Many sports shops are only concerned with a shoe being roughly the right size – but Tortoise and the Hare make sure it suits the way you physically walk and the shape of your foot – and unlike many main stream “sports shops” they actually get you the correct size (half sizes too), rather than trying to sell you whatever they still have in stock.

Proper gear doesn’t cost the earth either. I found that the correct running shoes for me were a lot cheaper than the “fashion” trainers that the high street sports super stores sell.

So, expert advice, great quality products (from major named manufacturers), and now 10% off. Can’t grumble at that! 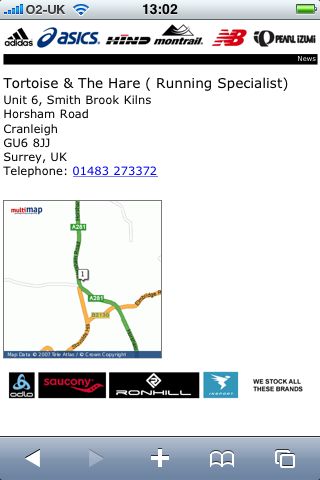 Today I was joined by E.J on my run. We’ve decided to (try) and do the C25K together – (or at least a programme based on the C25K). Misery loves company, after all!!

We decided on a slightly different route covering 5km, with a good 5 minute walk to get to and from the start point (to warm up). Admittedly the C25K programme says only do 20 minutes at the start, but we can’t reduce the route as it would mean crossing a lake…

As I am new to this (and have the underlying lung issue), we added an extra week to the begining of the 9 week C25K programme. We differ from the program by always covering 5km…and the extra start week…

We took our 5 minute brisk warm up walk to the start point, and then started on the route. We did 45 seconds of a reasonable paced jog, followed by 90 seconds of walking. This process was kept up for the full route. We were originally going to do a 30 second / 90 second split, but as timing would be awkward we decided on a jog pace count based on 4 steps to 1 count. 30 steps worked out as 45 seconds – surprisingly accurately at that.

The 90 second walks were timed on a wrist watch. Oddly the walking seemed to be shorter than the running…..

A week ago the both of us would never have thought that we could make the 5km, but we did well. We were so impressed at our achievement that we have started to think about running goals.

You know… next years Half Marathon doesn’t seem like a big step… and maybe a full marathon the year after. It would be great to be able to say I have run the London Marathon… but we’ll see.