I do charity stuff. To be honest I don’t have lots of spare change so I go and do things & collect sponsorship. I donate me to help raise money – and yes, I do sponsor people in their endeavours too. I put a percentage of sale profit into charity on auction sites. I always sign that tax waiver for organisations/museums so they get a bit more back.

It’s been over a year & I still have a broken ‘fund raisers leg’ for my efforts – and I’d do it again.

I do it for charities close to my heart. 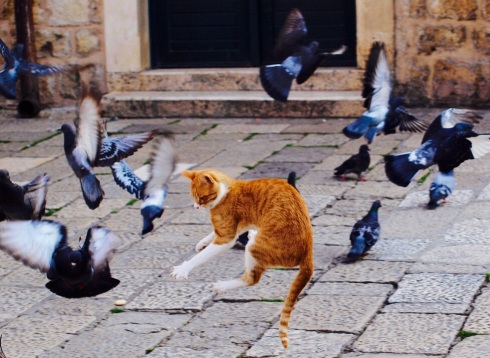 Too many charity posts are appearing on the ‘social media’ sites.

It’s like the boy who cried wolf… I’m starting to just flick past them. They’re self defeating.

I just saw a bike ride from London to Paris in aid of Alzheimer’s Research, and rather than think ‘I should donate’, my charity numbed mind just thought ‘I hope they use GPS Tracking’.

These ice bucket challenges are kind of bullying too. People are doing them not because they want to raise the cash, but because the peer pressure is so fucking high. It is internet bullying wrapped up in ribbons – and everyone tries to out do each other.

I’m off to donate to an Alzheimer’s charity to make up for that.

What annoys me are people complaining that Macmillan have ‘hijacked’ the ice bucket challenge. You’ll find some people did the challenge for Macmillan because they have more of a connection in their life with cancer than ALS, and other people followed that idea.

Hell, the ice bucket/ice bath fund raiser idea was around way back when I was at school in the early 1980’s, and way before then to.

What next? You can’t sit in a bath of cold baked beans to raise money for disabled kids, because sitting in beans is only for raising money for the blind?!?

Get some perspective here: IT’S ALL FOR CHARITY.

I think Macmillan have raised 5% of what ALS have taken, so that’s £50 thousand for every £1 MILLION ALS get.

To put that sum into relative values: 5 thousand people die from ALS each year, yet over 14 MILLION die from cancer.

At the end of the day though, as I’ve said before: it is all going to charity. If people want to get bitchy about what charity gets what, then maybe they need to look at the 25,000 people who die DAILY from malnutrition.

BUT in the first world, we don’t care so much about malnutrition deaths. We care more about the causes of death closer to our own lives & hearts – and those causes are what people want to give to, and for some damned good reasons.

If my house was on fire & my family was inside, I’d be way more concerned with that than cancer or ALS. It’s what is closest to you that counts – and that doesn’t mean some people dying from AIDS, ALS, Cancer, house fires, for our freedom in conflict zones, from natural disasters, are any less or more important than the others.

So – if you want to raise money & awareness for charities, then you are a true blue died in the wool hero, and I salute you. Just don’t expect everyone to jump on your charity when they have causes closer to their own hearts.