And then there were 6

Sadly, as mentioned previously, Terri passed away, so after some discussions we decided to get three new girls.

You see, you can’t just get one ex-battery rescue hen because it would get picked on. Getting two would leave us with five…. and that’s just not a round number of hens to have, especially as there would soon be two nesting quarters. That was it then… three new ladies were needed to make the number up to six.

Once that was decided, I took a look at the current run and nest box arrangement and figured out the best way to house and separate three new birds. They would need their own space to get used to the new freedom, but they would also need to be able to see the established girls to allow them to settle in.

I contacted Hen House World, the company I purchased the original hen house and additional parts from when we first got chickens. Back then I had asked for extra panels to extend the purchased run, and they were happy to oblige with advice and some ‘rejected’ panels – I just paid shipping costs. A little DIY skill was required, but I somehow managed…

I explained what I wanted to do this time, and chancing my luck I asked once more to see if they had any old or broken returned houses that may have been returned (they are always well packed, but couriers and the post office can always find a way to break even the best wrapped things). 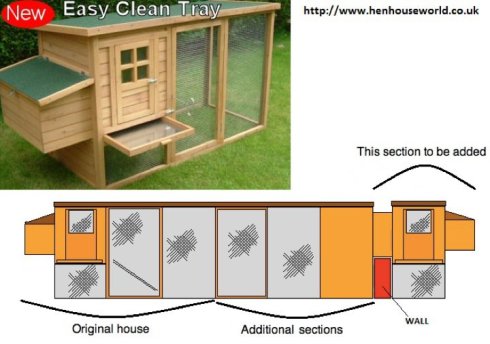 They went through their returns with my wish list and sure enough they had some panel parts. For a very modest shipping fee the damaged parts were sent out to me. I knew what I needed and I knew I could utilise the parts for my design.

A few additional parts were found (old packing crates, some corrugated plastic and an old hinge) and I set to work on the extension.  The most awkward part was the low garden wall that separated the old run from the new extension – but a catwalk was added and that solved that.

Next up I put a chicken wire fence in the open air run to split it into two parts. I also put a mesh halfway down the enclosed run to keep the girls apart when they were put to bed. Everything seemed fine at this stage…

We put in our request for the next lot of freed ex-battery hens to the British Hen Welfare Trust (BHWT) – (BHWT are also on Facebook) and waited for the pick up day.

Things mostly went smoothly and soon we were introducing three new girls into the pack (Yes, I know a collection of hens is not a pack, but you watch them working together and tell me that it isn’t a more apt group name for them….) .

A few squabbles broke out and blood was spilled as the six girls fought to fix their places in the new pecking order – and I even had to make the wire segregating fence into a double fence because they were attacking each other through the single fence! 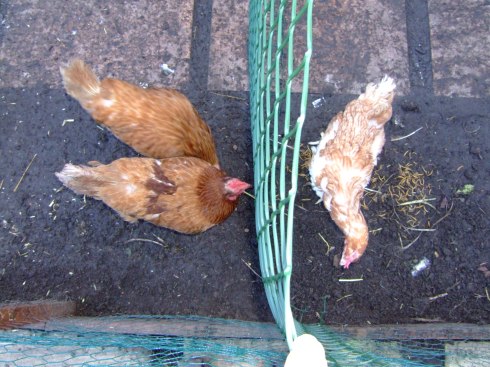 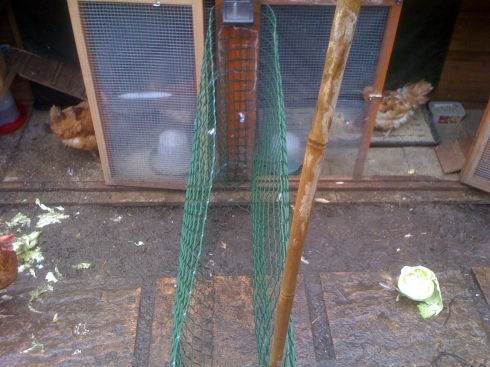 Over the next few days things settled down, and now the fences are down, they are all getting on with each other , albeit with a few pecks here and there. The girls are all laying and very happy in their new home….

…but what of names? Well, Alex was given the pleasure and now, joining Crispy, Chicken 11 and Mel….. we can introduce the new girls… Turbo, Terri 2 and Ginger… 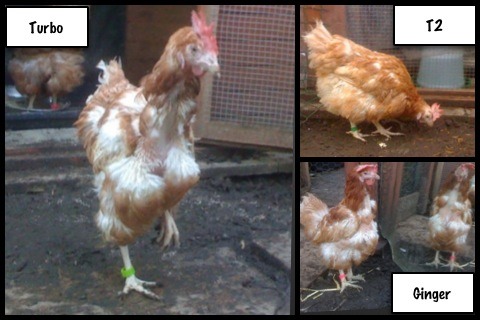 NOTES ON THE VIDEOS:

The new girls arrive at their new home. Free from the Hell of the battery farm, the British Hen Welfare Trust find caring homes for thousands of commercial laying hens destined for slaughter each year.

Our first girls (2010) were quite timid and quiet to start with, but soon settled in and have become great pets – very friendly and lots of fun. Our little lad (5yrs old) loves them – and we have all become very attached to these daft creatures.

Our new girls are a little ‘spirited’ right now, but they are fighting for rank (this is where ‘pecking order’ comes from). The thing to do is let them sort it out – stand back but keep an eye on them.

Be prepared for a little first aid – Vaseline & Gentian Violet (Purple spray – hides the blood, which just makes the others want to fight more).

The Hen has Landed

For a 30th birthday present for Chris I brought a hen house and signed up for four rescue hens from the British Hen Welfare Trust (BHWT) – (BHWT are also on Facebook). The hens are extra battery farm layers. The poor things are devoid of most of their feathers an have weak legs from their hard life in the battery farm. The BHWT rescue these hens – which are only 18 months old – from the battery farms at the time the farms send the hens to the chicken equivalent of a wood chipper.

The lucky hens get taken on by people to be given a better life in family and free range farm conditions.

Hen House World bent over backwards to ensure I had all I needed. In fact after I told them of the modifications I wanted to carry out (lift top roofs, extended run area, guttered mid section and remote lighting), they were happy to send me spares that were in unsaleable conditions due to minor defects – all I did was pay postage.

Two months after we embarked on the hen rescue we finally received our birds. I went to pick them up with Alex as Chris was at work. The pick up place had all the birds that had been assigned new lives (and not destined for the wood chipper).

Seeing these pale, feather bare hens with hardly any weight to them was quite shocking really. By the time we got to the pick up, Alex had fallen asleep and was quite surprised when on the way home the boxes started clucking! He wasn’t aware we’d picked them up at all!

Sleeping Alex and the hens

Once home I moved them over into the custom coop! They didn’t put up much fuss being handled and were quite quiet as they started to explore. It was now that I could see how feather bare and pale they were.

Pale, half naked, but saved

After a peaceful first day and an early night, the hens awoke the next morning to prove themselves fully functional! Chris went down and let them out of their bedding area into the coop at 6am… a few moments later I was woken up as she excitedly showed me a fresh warm egg. Over the next hour two more were produced – including one that was so big it needed some Vaseline help… Now they are settled it should be easier for them….

Chris was disappointed to not actually see an egg layed – and slightly annoyed that I went out to see the girls at 8am only to have one walk in front of me, stop, drop egg, then walk off! Egg number four had been delivered!

A little later we picked up some wire and posts to build an extended open run. Once I had built this (and Chris had clipped the hens flight feathers and tagged them) the hens were free to roam…. but it took a while!

It has been said that ex-battery hens are fearless. I guess it’s because they are used to so much stress in the battery pens that anything else is child’s play! Cats on the other hand, are less brave of a new arrival in their lives! Our three all took wide berths as they passed the coop, but slowly they became more curious…. or at least Spice did….

We end their first full day with the girls being happy, free and already perking up! Notice the colour in their combs – pinking up already!

The hens were also named today:
Alex named one “Eleven” – maybe a Spinal Tap reference… although he is only four!
Chris named one “Crispy” – As in KFC.
I named “Terri” (Theresa) due to the green leg tag.
I also named one “Mel” – bravest one who explores everything before anyone else… and is nuts.