Time travel hasn’t happened yet… isn’t happening now, and will not happen in the future.

We will not even meet aliens who have the technology. Not even Dr Who.

Remember the 70’s? Even the 80’s? The technology we had then was limited. No one even dreamed of owning a mobile phone… in fact if you go back a few more years, even the cutting edge scientists and sci-fi writers hadn’t even thought of the idea… and yet pretty much everyone has a mobile phone now… and access to the internet… which is another thing that 50 years ago could not even be thought about – It was beyond imagination!

Go back 100 years and no-one would believe we could video talk by a small hand held digital device to someone across the World… I’ve even Twittered to the International Space Station… Technology that was once not even imaginable is now common place.

What has this got to do with time travel?

Well, it has to do with rebels and kids with too much time on their hands if I am to cut to the chase.

The thing is, once it is common place (as all technology is eventually), it becomes a plaything for the idle and deviant.

The internet! A thing of knowledge, research and communication to start with…. but now it’s also a thing of silly videos, hacking, chat rooms, and pornography…

Time travel would eventually go the same way… It’ll start as a special project, it’ll develop into a more widely available technology… and eventually all the kids will be able to do it…. If they mix it with the internet I am not looking forward to receiving spam from the future

With such a widely available technology there will be those who abuse it… hackers, kids with too much time on their hands, terrorists etc… and as such it wouldn’t be long before someone went back in time and left proof that time travel was possible. We would have been visited by now.

Even if it is/was discovered when (if) we finally meet extraterrestrial life, then the same rule applies. Sure, it may take 100 years to creep out of the secure Government facility, it may take 1000 years…. 10,000 years…. but it’ll still follow the same path and become common place and be a thing that can (and will) be abused.

Sure, manufacturers of your pocket “iTime™” transporter will build in infinite anti-paradoxical time protective features (∞APTP-f ©), but as with all things, some clever folk will hack and jail break these features eventually… and we are back at square one – ANYONE can travel back and mess with the past.

We’d know about it by now if it ever happened at sometime… but it hasn’t…. & that’s what I’m getting at.

It’s not a far fetched thing really. Back in WW2 there were top secret RADAR research programs going on… and now most people have at least one item developed from this system in their house. A once top secret thing that a few years prior wasn’t even a figment of someone’s imagination is now, less than 100 years later, a common place thing.

So there you go, Time travel hascannotwon’t happen…. and if you just skipped to this last line, that isn’t time travel, that’s just cheating! 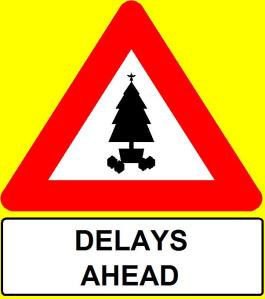 Cancelled is like saying “Failed” – and as many of the blog readers know, I’m not a fan of failure. Failure only happens when you stop trying to succeed. Sure you might be failing at something – but you only really fail when you give up.

This troubled time is one of  the lowest we’ve had as a family. Things are being put in place to ensure things don’t go so bad if the muck hits the fan ever again, but that’s for the future. For the moment we are scratching from day to day to try and get by. It’s “simply” a case of hanging on in there for a while until we sort things out – and not getting dragged down by the whole mess.

So… Christmas isn’t cancelled – it is just being “put back” – so expect some out of season greatings from us in the future!

33 years ago in the future

It makes me wonder what the next 33 years hold in store. The thing that grabbed my mind was not the old fashioned and outdated versions of the everyday items that we take for granted now, but the things we take for granted that didn’t even exist back in ’73 when I was born.

What will my child(ren) have that hasn’t even been thought about yet? Back in the 70’s they didn’t even have rough ideas of things to come. It wasn’t a case of how small or powerful the next mobile phone would be, as there were no ideas of mobile phones or pc’s, no cd’s and definately no mp3…none of that stuff even existed in anyone’s dreams.

What does the World hold in store for our future?