Fed up of the same rubbish, lying political parties trying to get to the top of the shit heap?

Not wanting to vote because ‘It won’t change a thing‘ or ‘They’re all rubbish‘…?

Shocked at how UKIP etc. have seemingly done so well?

In times of hardship – not a lot of money about, not many jobs and so on, people start to blame minorities like religions, various sexualities or more likely immigrants. Hell yes, blame everyone not a core player in the country – find someone to blame! It’s human nature.

Politicians in ‘National Parties’ love times like this because they simply act on this, then build on it to win your votes. It is happening all over Europe, not just in the UK. They stir up the hatred that is already there, then they add fuel to the fire, build it up, then promise to do something about it. 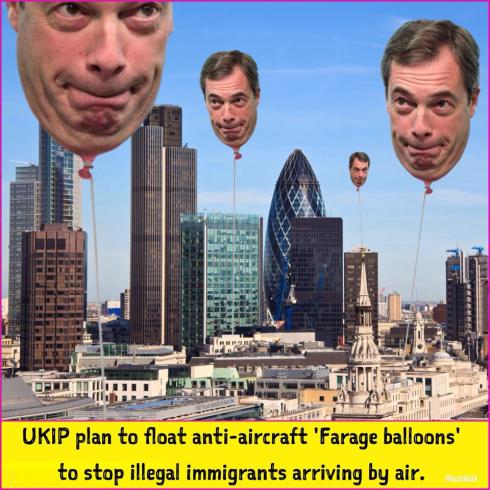 Farage Balloon. The great thing is, it supplies its own hot air.

A certain alleged one-bollocked poor Austrian artist with a stunted moustache did this back in the 1930’s.He didn’t like how the old school government was running the country and figured he could do better. The thing is he needed support and votes.

The country he lived in was in a dire position with huge debts and the currency was worthless. The public did what any people would do in times like this – they became angry and started pointing blame at immigrants and minority groups. Luckily there were a lot of Jews about that nicely fitted that category, and the mono-balled Chaplin impersonator saw this.

A few rallies to fire up the nation and this nobody got over 90% of the votes.

The rest is a rather messy and bloody history.

In all fairness, the asymmetric testicled slug balancer was simply a catalyst in the right place at the right time. If it hadn’t been him, then it would have been someone else. The country was in that much trouble that something had to break.

Either way, he used the oldest trick in the book. Use a topic that the masses all support and then build it up with lies and promises until they vote you in. Once in you can just forget them and do what you wanted in the first place. Sure, you do enough of what they want, but mostly you do what you want. Pathetic voters – They’ll do anything to get rid of the immigrants, free ice cream! Guns for everyone! A new car outside of every house! Jobs for all! Just vote for me… go on… (some of these have actually been used…).

There are a few things you should know.

If a shitty party win an election by one vote, and you didn’t vote, then you are as much to blame as someone who voted for them. Your vote could’ve stopped them getting in. Your lack of voting surely helped them get in.

Yeah, but they are really all crap. I hate them all. I’d rather shove live wasps up my arse and stir them with a stick to make them really angry than vote for any of the parties…

Right… Here’s pretty much how I see things at the moment. They are all crap. Some are way more crap than others.

Imagine UKIP or the BNP as a form of cancer. No one wants cancer.

Now imagine the other parties as chemotherapy. No one wants chemotherapy if they can help it. It wastes you away, it weakens you, it drains the life out of you, you look half dead and you can hardly cope with the treatment.

So… It’s cancer and death, or you take the chemotherapy and stand a good chance of coming out the other end of the ordeal with a life. Sure, you’re screwed up and may never be the same, but YOU ARE ALIVE!!!

So… when it comes to the vote, you can either do nothing, get cancer and die, OR you can have the therapy and do your damnedest to keep cancer from ruining your life, your friends life and your families life. Yes, your choice affects them too.