Mobile blogging this from my hospital bed…

Saturday Night:
Chris goes out to a party. She hardly ever goes out (I don’t tie her up), so I really wanted her to have a good evening. It was fancy dress & she looked great!

Later that night:
All the cats have just come in. Before I get to lock the cat-flap I hear a thumping, crashing noise in the kitchen.

I go out & find a mean feral tomcat freaking out.

The first thing I thought was….
No one will believe the description of this cat! It’s a cacophony of the most evil cats ever drawn on cartoons!

It had one snake eye glazed in a white mist, a glaring black eye & a scar across its nose. Both ears were shredded & it was covered in dirt & mud. It’s growl was guttural & menacing…. It was a cat that would need to be toned down in a book or film because it was too unbelievable…

It was a cat that, had Sir Arthur Conan Doyle seen it, literature would of had “The Cat of the Baskervilles” in place of that, on comparison, soppy hound.

It was big. It may have had a Bulldog as a father…

It was mad… The cat flap was set to “In only” to get our cats in for the night. This had the effect of cornering the Hell Cat…

As I went into the kitchen, crouched down & arms out, to keep it in one place & to open the door for it (which would work for most cats), it went nucking futs.

It shot straight at my left arm (furthest from it!) and went to town, biting down hard on my wrist, to the bone. This was a new level of pain for me…

I pulled free… or tried to, but as most people with cats know, a cat with a fight in mind is like the bastard child of a Chinese finger trap and a garden wood chipper…

It span up and around my left arm, sinking its teeth in again, and kicked out tearing my right hand.

It let go & shot into the house. I gave chase & managed to get between it and the stairs. As cats run scared they go flat out with no care… claws out getting grip on whatever they can…No way was this git tearing up stairs and shredding my sleeping little Alex!

I managed to herd it back into the kitchen by using a blanket to fence it in.

I freed up the cat flap, grabbed some water & chucked it at the cat to make it bolt out of the door from its position on the kitchen shelves….(I was praying it wasn’t about to start flinging pits and pans at me!!!)

I examined the damage… Shaken & still in severe pain from the bite.

I cleaned the wound up. It looked deep, but clean. I covered it with antiseptic cream & dressed it. I wasn’t about to call Chris & ruin her evening. If it got worse, then I’d call her.

Sunday Morning:
The bite has swollen a little, but looked mostly like bruising.

We took a trip to Frimley Park Hospital to get it checked out. The medic was surprised at the bite radius… and due to the nature of the wound I was given a Tetanus shot.

Medic said I’d done a good job with cleaning & dressing it (I should hope so! I’ve just re-qualified as a First Aider!), and told me to return in 24 hours for a further check up, as bites like this can turn bad quickly. I was given some heavy duty antibiotics and headed home.

Sunday Afternoon:
Wrist is painful to bend. Went for my usual cross country jaunt, but had to leave my Nordic poles at home as I couldn’t use them on the injured arm.

Sunday Night:
Couldn’t sleep as arm was throbbing. Put it this way, try slamming your fingers in a drawer… then keep doing that to the beat of your heart… and do it a bit harder each time so you don’t get used to it.

I was running a high temperature, but I put that down to a bug that Alex had just got over. Sleep wasn’t easy.

Monday Morning:
Standing in the bathroom I had sweat running off of me. I still put it down to a cold bug as I had a bad throat too.

I took a shower & noticed the bite was much bigger & redder…

We went to the Hospital for the check up…

One of the staff took my wrist & moved it up and down… something I really couldn’t do myself.

In two words: It Hurt.

Moments later a Doctor came in, saw the red mark (infection) had spread down my arm and said straight away I was to be kept in overnight.

The “these things can go bad very quickly” had happened.

The Doctor went to put in the needle for my intravenous drips and to take samples from the line. I’m not keen on needles, but I don’t mind them and it’s really only the thought that makes me cringe…

The needle went in. I felt fine. I’ve had needles in me before – injections and giving blood, so no drama… but my head went light…

I told the Doctor I was becoming dizzy & nauseas. I was laid back & the dizzy became a 25 vodka shot drunken stupor…

I felt all energy drain from me, I became clammy (sticky, not shellfish like) & a cold sweat poured from my head. Chris said my skin went very pale & my lips turned white…

Thank God I’d done that First Aid re-qualification! As all these symptoms occurred I was mentally aware. I realised I was going into shock. Had I not realised this, then the experience would have scared the Hell out of me.

I lay horizontal for a while as my body spun back to speed, then was wheeled away to get my first IV of antibiotics.

After the first dose I was then placed into the Clinical Decision Unit (CDU) for observation overnight.

This is where you find me now… Laid up with my arm in an elevated sling to stop the infection tracking any further. A “Bradford Sling”… a sling that I am sure has been banned as cruel and unusual in the Geneva Convention.

I was going to wait until I got home to do a blog entry, but so many kind and curious friends in the flesh and in cyberspace wanted to know what’s been happening…

To all those who have followed this on Twitter and Facebook and given me support and best wishes, I thank the lot of you! You’ve kept my spirit up wonderfully!

To Chris and Alex – I love you loads and was so happy for your visits today (even when Alex played “poke daddy’s IV needaarrgghhh!”) 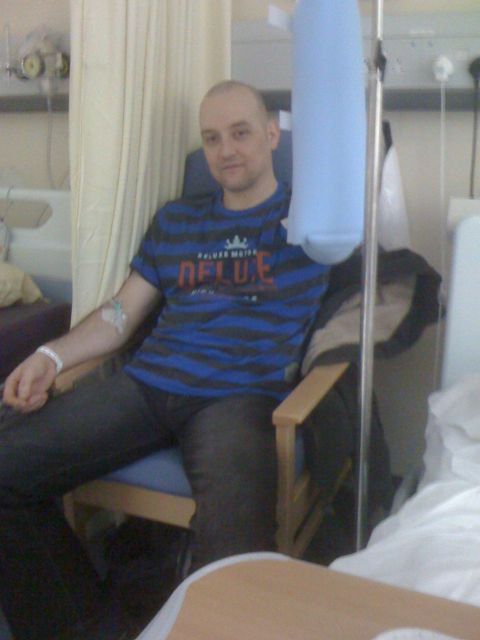 I’m still in hospital – and feeling quite lucky really.

This morning a Surgeon tested the infection and became very aware it may have got into a tendon or two.

Straight away I had my food and water stopped. A drip was put in my arm and I was prepared for surgery for the night.

From elbow to hand on the back and front of the arm two cuts are made.

These are opened up so that the surgeon can flush through and wash out the infection.

The arm is dressed, but left un-stitched, for 24 hours at which point it is flushed out again, checked over and stitched.

In really simple terms they peal my arm & jet wash it.

Midway through the day the Surgeon was encouraged by the reduced swelling and slight pain reduction. He was encouraged enough to postpone (in view of cancelling) the surgery.

That’s where I am now… In a slightly happier place… Schrodingers Cat Bite, so to speak…. Until it is checked tomorrow I am and am not having surgery…. Slightly ironic…

Just had trippy 2 hours due to pain killers. I mean proper trippy….

I realised as soon as I took them that I was off to la la land, so whacked on Pink Floyd: The Wall, and just let it drift over me.

Vivid stuff… weird imagery…. Still half out, but had to buck up as Ward Reg just did walk arounds.

Surgeons & microbiologist came and checked me out.

They are happy with my range of movement and rate of swell reduction.

Pain in tendons has reduced & is now more focused around the actual puncture points.

Due to this I am to have one more IV antibiotic course and then tablets for 10 days. I also have to keep my arm raised in the Bradford sling still…. even at home, where I’m off to today….

If things start to go backwards though, that operation will be waiting for me.

Thanks everyone for your continued support and messages. They really helped keep me positive through the most frightening experience I’ve encountered so far!

www.ravenblackengineeringltd.com about.me/thelucasblack END_OF_DOCUMENT_TOKEN_TO_BE_REPLACED
This entry was posted on Monday, March 29th, 2010 at 6:47 pm and tagged with antibiotics, bite, bone, cat, feral, first aid, infection, pussy, scratch, tomcat, wild and posted in Family, Fitness, General Interest. You can follow any responses to this entry through the RSS 2.0 feed.
« Fat and Fit?
Cat Attack – Photo Link and Twitter thanks »

11 responses to “Tomcat Down”